Contact us before purchasing, with regards to delivery times and purchasing options.

Please specify your bike at checkout

The Chrome PRO 2 reprisents the maximum evolution of the Chrome family further extending the functions of the Plus and Pro version. Designed for the most demanding drivers / Team, extends to 150 the number of channels available at 500Hz, it can manage the acquisition of heartbeat through bluetooth heartrate sensor, has a totally configurable can-bus for the 12 inputs, it can connect to an internet hotspot to communicate with the Chrome apps site managing the laptimes via internet in real time.

The Chrome PRO 2 also incorporates a 433Mhz receiver that allows it to interface with our supplied TPMS sensors. You can also order this model with the full carbon case, reducing the weight of the instrument panel by 25%.

With the ability to manage WiFi connections, create a WiFi hotspot the Chrome PRO 2 can connect to an internet hotspot to communicate with the ChromeLaps website. The ChromeLaps site allows you to keep track of your days on track, divided by sessions and then having your own personal transponder. Thanks to the public area of the site you can also see, on each circuit, the timing of anyone who is sharing their data, challenging them in the attempt to climb the virtual ranking.
The Chrome PRO 2 adds another 12 analog 100Hz channels which are totally programmable as CanBus inputs (bringing to 33 total channels read), a 433 MHz receiver for TPMS sensors and the possibility to connect to a heart rate monitor.
Thanks to the new integrated Bluetooth BLE receiver, it is possible to connect the Chrome PRO 2 to a Polar H7 or H10 heart rate belt . A heart-shaped icon on the screen will indicate that the connection has been made by making your heart beat on the screen in proportion to your heart rate. The data are then acquired in order to be subsequently reviewed so as to plan a correct physical training and targeted on the basis of personal physical effort.
The Chrome PRO 2 integrates a 433MHz receiver that allows it to receive the signals from our TPMS sensors. It is therefore possible to always monitor the pressure of both tires and the temperature of the rim so as to check for example the correct heating with the electric blankets.Configurable alarms allow the RGB leds to be set to signal any anomalous pressure and temperature values.The values are then acquired so that they can be processed later.
The Chrome PRO 2 comes complete with two TPMS sensors with corresponding 90-degree valves that can be requested in 8.5 mm or 11.5 mm diameter.

The Chrome PRO 2 can also be ordered with the full carbon case which reduces the weight by 25%.The case is made with the most modern lamination techniques, carbon twill in 200g hides worked in autoclave at 120 degrees and 8 bars of pressure and then internally CNC worked to guarantee minimum tolerances. The whole is finished externally with two coats of UVA transparent in the oven.

The Chrome Pro 2 is the thinnest Chrome ever produced. With a body thickness of only 15mm it becomes easy to install on all super sports bikes while the IP67 connector makes the use of the previous protection shells for cables unnecessary.The front dimensions are the same as the previous Chrome, confirming a design that made this dashboard easily distinguishable on all race fields. 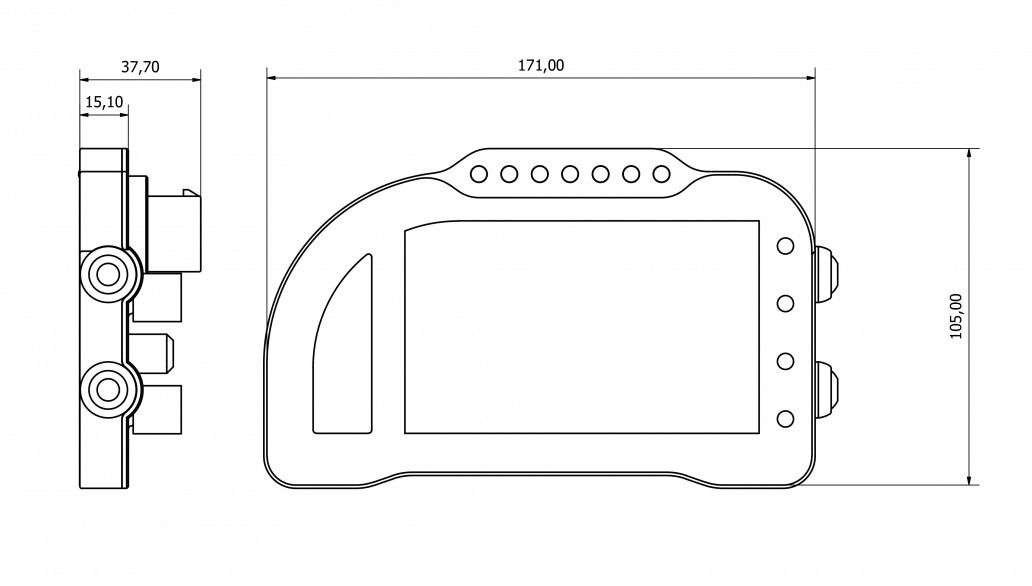 The Chrome Lite, Plus and Pro share the same CNC aluminium case, the high-brightness display and the basic features that immediately characterised the dashboard Chrome. Below are the main differences between the three models.

*Chrome has 8 external analog inputs, inputs 9 to 12 come from the can-bus
**The Bosh LSU 4.9 lambda sensor is supplied in the kit
***The Chrome PRO comes with two TPMS sensors and related valves
**** The full carbon case is optional. The WiFi antenna for the Chrome Plus and PRO and the Bluetooth antenna for the PRO are sold separately.

Compared to the previous generation, the new Chrome Pro 2 features a single front plexiglass that protects the TFT display even better. The CNC machined Aluminium case – now even thinner – proces the housing for a new single rear connector with IP67 protection. The appearance anticipates only some of the differences wit the previous model such as :

The Chrome Pro 2 comes in a package containing:

To install it you only need to choose the plug & play adapter for your motorcycle.

Video acquired with Logitech C270 (with I2M aluminium case) on Chrome Plus:

Other kits available soon , send us an email for further info.

Prices for UK customers - VAT is applied at checkout, After Brexit all EU countries should have no Import duty BUT VAT and local taxes may be requested by customs in your country. We guarantee to beat any price. Dismiss