What FTecu Flash Tune kit do I need to purchase

We have a special blog post that will discuss the kit options and help you decide which is best for you.

Click here to read the blog post on Which cable should you buy, if you have any questions or require any further help,mail or complete the contact us page  and we will be more than pleased to assist you.

We are in the process of updating our FAQ section, a lot of the questions and answers below are about FTecu, and whilst most are still relevant many are specific to the R1 and R6 motorcycles up to the 2014 R1 and 2016 R6. We will be revising  the questions to be more up-to-date  and cover more of the products we offer.

If you have any specific questions then please let us know so we can include them on this page.

All modern bikes come restricted in order to meet strict emissions and noise requirements, using Flash-Tune from FTecu you can remove these restrictions and make your bike perform how the designers and manufacturers would like to have made them but couldn’t because of bureaucratic controls.

Before Flash-Tune you could only modify the fueling using a third party piggy back device like Dynojet Power Commander or Bazzaz, now thanks to FTecu you can not only adjust fueling but also remove all those performance limiting controls that Governments place on your bike for it to pass homologation. Up until now this kind of modification has been reserved for race teams with expensive after market ECU’s like YEC, Motec and Marelli which also require a change of wiring loom, with FTecu we can work with race or stock wiring looms..

Simply put, it is the best value for money performance modification you can buy for your bike.

The options available are bike specific but for the 2009-2014 R1 the adjustments you can have include :-

VeloxRacing now sell through our website or through our growing network of dealers, on bike and bench flashtune kits so you can flash your own ECU and adjust and refine your settings.

How Does the VeloxRacing Mail In ECU Flash Service Work?

We perform your ECU flash the day we recieve your ECU from you. Our turn-around time is typically a couple of hours which usually means 3-4 days round-trip. Shipments will not leave after 2:30PM as that is the cut-off for the Post Office on next day signed and tracked deliveries.

Whilst doing any work involving the electrics you should disconnect the battery, which is under the seat.

Remove left hand fairing (5 quick release hex bolts, and on the inner V panel there are 3 or 4 black plastic quick fit fixings, these are undone by pressing the centre with a small screwdriver.

Unplug the 2 connectors on the ECU, do not force them, there is a tab to depress and they should slide out quite easily.

Gently pull the tabs back on the ECU holder that hold the ECU in place.

The system changes the length of the intake funnel in order to maximize cylinder filling efficiency.

The YCC-I system makes it possible to use the high-rpm oriented system with the short funnel layout, while keeping the higher torque characteristics of

the long funnel at low and mid rpm.

The principle of variable intake length is based on the phenomenon of reflected pressure waves in the intake duct. They reflect at the end of the intake duct and return to the intake valve.

At high rpm the intake duct is shorter, because the time the valves are closed is shorter too. In this way the arrival of the reflected pressure waves is again matching with the opening of the valves.

With Flash-Tune the YCC-I maps are configured to maximise the benefits of this technology v’s the fuel and setup of your bike. This combined with other settings on Flash-Tune mean your bike will accelerate much stronger than a stock bike.

What is YCC-T and why and how is it restricted ?

YCC-T stands for Yamaha Chip Controlled Throttle the name for the fly by wire throttle on your modern Yamaha sportsbike. To meet strict emissions regulations to get the bikes homologated Yamaha restrict the throttle quite severely which affects the way your bike accelerates in a bad way.

You will see that not only are you getting your 100% throttle input earlier but stronger throughout the rev range, this means your bike will accelerate much harder than a stock bike.

This is best illustrated in looking at the two throttle maps below, the first is a stock Yamaha R6 08-12 throttle map, the second is a derestricted bike. You can clearly see that the stock bike only gets 100% throttle despite the rider having the throttle wide open when they get to 7500rpm and then only until 12,000 rpm where it again tails off. Compare with our race throttle map which gives you 100% throttle from 5000rpm all the way to the rev limiter. 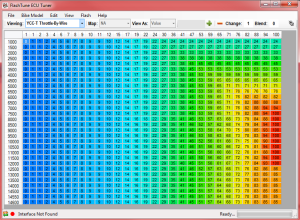 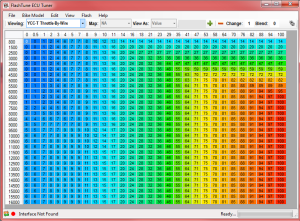 You will see that not only are you getting your 100% throttle input earlier but stronger throughout the rev range, this means your bike will accelerate much harder than a stock bike.

What is AIS and should I disable it ?

Yamaha use a acronym called AIS which stands for Air Induction system (other manufactuers call it a Pair Valve).

This system injects air into the exhaust ports in the head. The system uses the oxygen in the air to burn any excess fuel in the exhaust gases in the headers. This is used to reduce exhaust emissions. The ECU only uses this system under certain conditions. The most notable side effect of this system is the popping and banging that can be heard during deceleration or what we call the overrun, this is to fool emissions controls that the bike is running leaner than it actually is.

This option in the Flash-Tune software or VeloxRacing ECU Flashing Service will disable the system by commanding the valve to be in the closed position at all times. This has the same effect as installing AIS block off plates. The effect is far diminished popping on overrun.

It is advised that block off plates be installed eventually. For example you could use this option until the first/next time you change your spark plugs. Removing the pump will also remove around a kilo of weight from the bike that you needent be carrying around.

What is Engine Braking and why should I adjust my bikes settings ?

Engine Braking is the slowing effect you get when you close the throttle with the clutch out on a four stroke, most manufacturers actually turn off the fuel injectors as this “saves fuel” or makes the bike put out less emissions, on some bikes this can be quite a strong braking effect which can destabilize the bike, especially if you are transitioning from a straight into corner.

Reducing the effects of engine braking makes the bike smoother to ride, this is typically the #1 reason (along with YCCT restrictions) R1 14b 09 – 13 riders look at the flash tune ECU remap in the first place, although we have plenty of customers of other bikes that have requested less engine braking and are very pleased with the way their bike now feels.

In essence what we do is disable the injectors from cutting of on the throttle being closed so fuel can be used by the engine, this reducing the engine braking effect, making your riding experience smoother and safer.

The traction control remains untouched after re-flashing with Flash-Tune. We do not adjust any of the stock parameters during our ECU Flashing Service and nor can you with the Flash-Tune ECU Interface and the maps remain intact with the original values.

For the 2015+ R1 we have race team packages that allow you to create custom Traction Control, Anti-Slide, Ant-Wheelie etc strategies. these were created in conjunction with the leading racers in the USA MotoAmerica race series in 2015+.

What if I have a power commander map I already like and why is this better?

After extensive research, Flash-Tune developed a system which allows us to load .djm & .pcm formatted power commander maps directly into your ECU. The .djm map format is slightly outdated but useful as it is very well known and maps in this format are readily available.

A power commander is a piggy-back controller which installs between the ECU and fuel injectors. It monitors the ECU output and modifies it by a given percent before forwarding the new modified signal to the actual injector.

This concept was revolutionary when it was first introduced because it allowed for quick and easy basic fuel adjustments but since then it has become outdated. Modern Sport bikes use different fuel calculation methods for cruising and hard riding as well as complicated atmospheric and ram-air corrections which make them impossible to tune correctly with a simple piggy-back controller.

With Flash-Tune we modify the ECU’s base-maps directly, allowing your ECU to operate normally while complimenting your performance modifications.

We make your bike run how the factory would if they weren’t forced to meet strict noise and emissions standards. In short your bike will be Faster, Smoother, Better in every way !

Will my immobiliser still work ?

Yes, however we do have the ability to turn off the immobilizer if yours is damaged or you need to remove or change the lockset.

What is the Speedometer Correction Feature ?

Your bike is probably running about 6% optimistic, i.e. at 100mph indicated on your dash you are only really going 94mph. This inacurracy can be compounded if you are running different sprockets sizes. The SpeedoHealer type function allows you to correct your inaccurate speedo.

The best way to do this is to take a smartphone with GPS and check your speed on the highway. Remember, because we are dealing with percentages here, the faster you go, the more accurate it will be.

Use this site to find the percentage your speedo is out by.

(We are not suggesting you hold your phone and check your GPS speed, be sensible !)

For trackday riiders and racers you can also turn your Speedo into a Gear position indicator, so instead of your speed being displayed 10, 20, 30, 40, 50, 60 will be displayed to indicate which gear you are in. You can easily then mask off the 0 so only the gear you’re in is displayed.

You will also need to switch your dashboard to KPH as this is how the gear indicator has been calibrated.

Most of the latest bikes do not have a speedo calibration feature in the FTecu software as the speedo is now taken from the wheel speed sensors on bikes with Traction Control, and not on the gearbox shaft like on previous bikes which would see the speedo thrown out when you change sprocket sizes.

What if I am not satisfied?

With VeloxRacing ECU Flashing Service we have a 100% satisfaction guarantee with free reflashes for as long as you own the bike, you just pay the postage on future reflashes.

If you change your exhuast or filter and need a new map or setting or want to put the bike back to stock we will do this free !

I am still unsure what services are right for me?

Drop us an email or fill in our contact form with your telephone number and we will call you to discuss your requirements or cover off any questions you might have about the Flash-Tune cables and the Veloxracing Mail in ECU Flash service.

Prices for EU countries include import Duty and for UK VAT is applied at checkout, all other countries have no import duty or taxes applied. We guarantee to beat any price. Dismiss